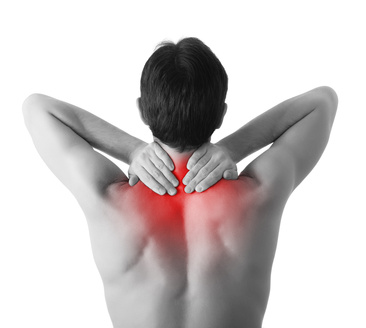 One can experience trapezius strain symptoms in the form of aching and sore muscle pain. This typically originates from one’s shoulder region all the way to the back of the neck. Discomfort can also be felt in the upper area of the back, between one’s shoulder blades. Shoulder ache can typically occur at the start of a strained trapezius injury, and can be exacerbated by poor posture and repetitive motions.

When an individual is experiencing trapezius strain, the overall soreness tends to make the muscles near the shoulder blades feel tense. The symptoms of this condition are similar to that of overworked tightness in the rear of the shoulders. This discomfort may feel like a constant strain that is only alleviated by resting. In certain cases, though, the discomfort may even negatively impact sleep. The sufferer may have trouble finding a comfortable sleeping position contributed in part by the compression of his/her shoulder muscles.

The symptoms of a strained trapezius can be exacerbated by further activity. This is particularly pertinent for those who sit in front of a computer for several hours each day, for example. The individual may demonstrate poor posture, such as constant slouching for extended periods of time. After many hours, symptoms may begin to appear in the form of a constant tightness that is hard to alleviate.

When some people strain their trapezius muscle, he or she might also experiencing a hot, burning sensation in the affected area. This heat is the result of inflammation of the tendons and muscles surrounding his or her trapezius area. In certain cases, typically when shoulder pain is also prevalent, tingling or warmth can spread through the arm.

Swelling of the muscles can be a symptom that is common with trapezius strain as well. The swelling may occur in a localized area, or puffiness above one’s shoulder, or in the rear of it. The swelling may also come with tenderness or redness at the location of the injury. The soft tissue spreading out from underneath the trapezius muscle may cause the surface of one’s skin to be hot to the touch.

Difficulty performing daily activities may be a sign of a trapezius strain. Such daily functions that the affected person is having trouble with may include extending one’s arm without discomfort or pain, and stretching. Pain may also be experienced when lifting objects. For example, when lifting or grasping at an object, the affected individual may not have the same mobility they once had, or they feel pain.

On occasion, one may feel headache pain as well as sore neck muscles due to an injury to the trapezius muscle. The headache may originate at the base of the skull, spreading further out to the entirety of the neck area. Typically, the pain is alleviated by ingesting anti-inflammatory medications or after applying ice on the affected area.